You Are Here: Home → 'The Goldfinch' movie drums up very strong reactions from critics

'The Goldfinch' movie drums up very strong reactions from critics 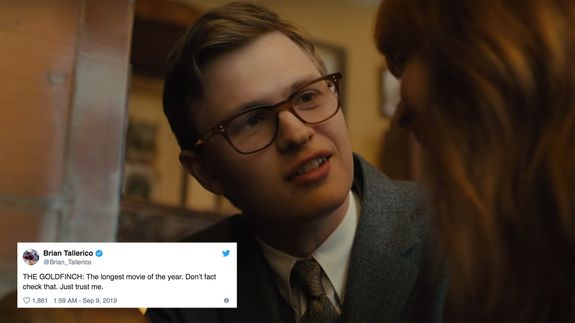 The Goldfinch has premiered at the Toronto International Film Festival and critics were… bored.

Directed by Brooklyn‘s John Crowley, it’s a film adaptation of Donna Tartt’s lauded novel of the same name, a Pullitzer Prize-winning best seller with over half a million ratings on Goodreads and an average just shy of 4/5.

Because of the book’s huge success, there was more than a little excitement when the first trailer for the adaptation, starring Ansel Elgort, Finn Wolfhard, Nicole Kidman, and Sarah Paulson among others, came out back in May.

But judging by the early reactions from critics who saw it at TIFF on Sunday, it seems as though the movie might not be quite as well received. Read more…